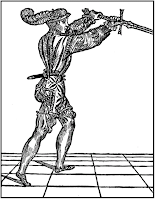 For new and inexperienced fighters we also give classes on Thursdays. The Thursdays class focuses on the mechanics of fencing (with rapier) and the basics of footwork, defense and offense. I also invite experienced fencers to help train new fencers.

In particular a rapier is a type of light, one-handed sword originally carried for civil defense. The term rapier is believed to have first been used in the late 15th Century, but the weapons known as rapiers were in widespread use from the 15th through 17th centuries.

As firearms became more common, and armor less effective against them, a need for speed in an engagement made the rapier a natural choice. A rapier generally consists of a 1 1/4 inch wide blade with quillons and a one-handed hilt. While the blade changed little during its time, the rapier’s hilt went through many changes. Hilts were gradually enhanced with swept basket, bells and improved quillons, all of which protected the fencer’s hand.

The use of the rapier remains the world’s most studied style of swordsmanship. Rapier combat is best known for its lightning fast moves and highly accurate attacks. In the SCA, rapier combat is recognized in almost all kingdoms. The rules of engagement vary slightly from kingdom to kingdom but the basic art remains the same. 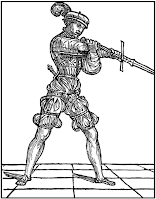 What you will need at your first steel combat practice

Children under the age of 18 MUST be accompanied by a parent or authorized guardian (guardian consent form) AND a consent to participate (minor waiver) must be signed at practice or on file with the Society. Children may only participate in rapier combat.

Between the 2 local baronies we have plenty of loaner/protective gear. You will still need to follow a few clothing rules and bring at least one piece of equipment. Steel combat IS A FULL CONTACT SPORT and VERY ENERGETIC. So, drink plenty of water before practice and ask your doctor about any medical conditions. Wear long pants that fit loosely, a good set of sneakers and have a long sleeve shirt handy that covers all the way to your wrists AND overlaps the top of your pants (approx 6 inches), so that no skin shows at the midriff when moving around.. Wear socks long enough that your pant legs overlap by 4 inches. No skin should be visible between the pants and shoes. Men/boys must bring their own athletic cup with jock supporter.

At your first practice expect to learn basic footwork and bladework. Most youth fencers won’t spar with others until they have learned the basics.

Well, how do I get to practice?

For the most current contact information, directions and times please look at the Local Activities page.

For copies of the rules or information about other groups in the kingdom you can go to http://rapier.ansteorra.org/.

Scroll back to top