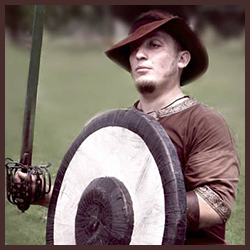 How did you discover the Society for Creative Anachronism and how long have you been playing?

I’ve known about the SCA for years. I played in a HEMA group and boffer group before playing here. I tried a couple SCA practices about five years ago, but didn’t start really playing until fall of 2015 at Triumphs of the Eclipse.

What about the SCA attracted to you and made you want to become a part of it?

A lot of things. One is the camaraderie. It wasn’t until I got hooked up with my household that I really found my place, that I felt I belong. There is such a myriad of things to do. Multiple types of fighting, performance art, creative art, historical science, service to the society…and on and on. I like that I simply cannot do all the things. There isn’t enough time.

What are your favorite activities and aspects about the society?

Fighting in a unit! Good lord, I love the rightness of having you and yours versus the enemy. Camraderie plus tactics plus fighting…it is the best.

I also like armoring. I’m a fair armorer and crafter. We have a weekly shop night that includes armor tacos and cigars. It’s the second best thing.

I also like bardic. I’m still getting used to singing in public, but yeah, it’s a fun thing.

What have you gained personally from becoming a part of the SCA?

I have gained all my closest friends, what I call my battle family. It’s the most worthwhile thing in the SCA. If you were talking to someone who had never been a part of this and you told them how you excelled at fighting, or arts and sciences or whatever, they are kind of understanding and glad for you. But when I talk about the real friendships in my battle family, the close knit group around me that trains together, fights together, crafts together, drinks together, helps each other outside the SCA and forms real bonds, that’s something of real world value that most people don’t have.

What are your favorite memories so far?

One on one training time with the greats and then showing others those tips and tricks. I also enjoy seeing the guys I got into the SCA be the strongest part of the premier fighting unit of our kingdom army. That was awesome.

I also loved walking into our household camp for my second Gulf Wars, and everyone is like, “welcome home!” Another favorite memory was my first melee battle kill… and blooding my nose three times!

What would you tell new people or those who are unfamiliar with society about the SCA?

Dive in. Don’t just go to a practice, but find some friends and call an event. It is the most fun I have ever had. 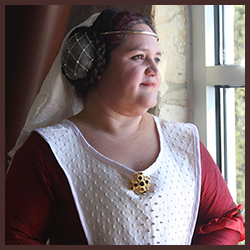 When and how did you discover the SCA?

I discovered the SCA when I was 17 at a small event back in California.

What was it about the society that attracted you initially?

I was really taken in by the camaraderie and easy going feeling.

What about the society made you continue to play and be involved?

The parties! And A&S! And fighting! ALL THE THINGS!

What have you gained personally from being a member in the SCA?

The biggest thing I have gained from the SCA is confidence. Running a baronial event, not once but twice and having complete faith in the people who supported my vision but also assisted with the implementation. Knowing I had mentors to help whenever I got stuck on a detail or unsure of how best to resolve an unanticipated situation. But more importantly, I gained confidence that I can do an event and not be stressed out over it.

How does the society affect your normal every day life as well?

Since I am not able to play anywhere as often as I used to, I’m noticing that I have an excess of time that I have no idea what to do with now.

What what are some of your favorite memories from your time in the SCA?

Lochlan and Gwen being on the thrones, becoming Don Pieter’s cadet, becoming Mistress Myfanwy’s protege. The awesome kill of Duchess Gwen at the gate at BAM.

Can you share a story or a time when the SCA changed your life?

Meeting my husband and watching the him flourish as a fighter and squire. I have never been so proud and excited for someone’s path.

What does being a “yellow belt” in Ansteorra mean?

I would wager a guess that if you asked 12 different people that question, you might very well get 20 different answers. A yellow belt is a type of mentor program that one enters into with a Pelican, which is a service peerage of the Society. Being a yellow belt is a way to signify that a person has agreed to the arduous journey of learning, growing, and developing leadership skills. It signifies one’s investment into The Dream, to see it continue to grow and to flourish. To protect it from losing any of the significance it has come to mean to so many different people throughout the years the SCA has been in existence. In short, a yellow belt is a way to be recognized as one of the workers who have dedicated their time to building up others while working on a common goal. 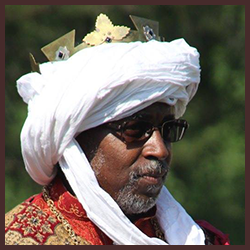 When and how did you discover the SCA?

While I first encountered the SCA by watching a small fighter practice in 1982, I didn’t consider joining until 1988 when a small group of friend from a gaming shop in Waco (Emerald Keep) told me stories of the fun they had at an SCA event.

What was it about the society that attracted you initially?

Heavy weapons combat. After borrowing some armor and getting beat on by an Emerald Keep local, I was determined to pay him back by getting better.

What about the Society made you continue to play and be involved?

A combination of elements: first, the local group (Emerald Keep) was filled with friends; second, I found that being in the SCA allowed me to regularly express a collection of virtues (prowess, chivalry, courtesy, honor).

What have you gained personally from being a member in the SCA?

The friendship and camaraderie of a tremendous number of people across the kingdom and in across the US.

How does the Society affect your normal everyday life as well?

I often find myself weighing my daily actions against the ideals of the Society. I find it very easy to extend courtesy to those around me.

What are some of your favorite memories from your time in the SCA?

Can you share a story or a time when the SCA changed your life?

I was still in the second year in the SCA and was fairly preoccupied with fighting when a beautiful young lady offered to share chocolate chip cookies with me. This was the second time that I had really talked to this young lady, and we continue to share our lives together as husband and wife, now standing at 26 years.

What does being a Knight and a Lion of Ansteorra mean?

Becoming a Knight was one of my targets within two months of joining the SCA, which was when I was offered a squire’s belt. I was blessed to have a collection of teachers and friends who shared in the ideals of chivalry.

The Lion was an award that I had long admired. Before receiving the award, I considered a Lion to be a person who, when the story of Ansteorra is told, the story would be incomplete if the person was left out. That TM Gabriel and Sonya (as well as so many among the populace) believed that I was that sort of person is still both exciting and humbling.

What do you wish people who are new to the SCA know about the Society and what they can gain from becoming a member?

When you join the SCA, remember that you’re joining a group in order to have fun within the ideals of the Current Middle Ages – emphasis on the fun. You will find that you are among a tribe of like-minded people. In addition, you likely joined because of ideals such as courtesy and honor.