The year is 1521. Tensions are high! The king is more concerned with his Conquistadors and his new acquisitions in the Americas than his own people at home! Infighting is on the rise and the inquisition further divides the masses! Taxation to fund the skirmishes across Europe further escalates the dissent! The people are not happy! Revolution! Revolution! Who will you represent…the commoners, the nobility, the cardinals? Come take part in a Spanish Revolution and help determine who will rule the day!

Minors must be accompanied by a parent or legal guardian. They may also attend with a 21 year or older adult with a signed and notarized Minor Event Waiver Form from the parents.

Site is Dry
Horses must have proof of negative Coggins

please send an email to feastreserve@gmail.com reserving your spot for feast. Feast spots are limited so get those reservations in soon!

All paid adult gate (aged 16+) entrants will also receive a ticket for a chance to win a damascus knife created by our very own Forged in Fire Champion (season 4, episode 15) Baron Krag von Berghen! Entry into competitions will get one additional ticket. Must be present during drawing to win. In the event a minor wins, they must have a guardian/parent present. 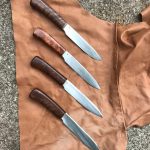 1080 steel blades, black walnut handles. One each to go to the Baronial Champions chosen in Archery, Chivalric, Equestrian and Rapier. Good luck to all competing!

Come and join the Baronies of Loch Soileir and Stargate at Revolt of the Comuneros: a Co-Baronial Event.

Vie to become a champion for either barony in Archery, Chivalric, Equestrian, or Rapier. Stargate is offering these lovely coolers to each of our champions!

Their excellencies of Stargate and Loch Soilleir have requested some fun events for the chivalric fighting this weekend. A great way to start the day off with a cup of blam is a 3v3 melee tourney. It is sure fire way to entertain the crowd and show off teamwork and individual prowess.

This will be closely followed by a first to three points single sword barrier battle tourney. A very fast paced tourney to help every one who didnt get enough fighting in the 3v3.

Everyone should be good and warmed up for the Swiss 5 bearpit tourney. Sir Ysfael ran this last year and it was so popular that its back again. You have 5 weapon styles to choose from, single sword, two sword, sword and shield, great weapon, and 6ft spear. This tournament runs until everyone is out of styles to fight with and only one warrior is left standing.

These first three tourneys will let their excellencies narrow the field down to 6 finalists. These skilled fighters will get a chance to go head to head in a viking boat battle. The Vikings will bring two long boats near, along side. The oars would be held out horizontally. The two combatants would fight while standing on the oars. If you fall off the oars you die.

Good luck to all that would enter.

When signing in with the list mistress, each combatant will pick a side (or be assigned a side): Comuneros Rebel, Royalist Castilian, or Churchman.

Early in the day, tensions are high, but hostilities have not commenced:
• Each group will take a part of the field to train for obvious conflict to come.
• Challenge within your team
• Report wins to List Mistress
• Marshall if not fighting

At this point, the rebellion begins, this will be done in 3 segments:
• Comuneros vs. The Church (Royalists marshal)
• Church vs. Royalists (Comuneros marshal)
• Royalists vs. Comuneros (Church marshal)
• Challenge as you will
• Report wins to List MistressAfter each group has faced the other 2 groups, the Landed Nobility will confer with the List Mistress to see what they have witnessed compares with cold, hard numbers. The nobles will choose members from the opposing teams that they wish to see more from. Those moving on will be informed and the nobles will request pairings as they see fit. The tournament will conclude when the nobles have seen enough and are confident in the choosing of their champions. This segment of the tournament will begin at 2:00.At the conclusion of the rapier champion’s tournament, there will be a Cut & Thrust Tournament for those seeking renown in that art. Tournament format will be determined by number of entrants, but will likely be some form of Swiss 5 or Round Robin. There is no championship to be won, but your prowess will be recognized. (Note that the new rules revision for armour for C&T that were released this week have a grace period until July 27, so pre-revision armour standards will be enforced.)
Master Caelan MacRob
Champion of Stargate

The archery tournament for the championships of Loch and Stargate will consist of 6 rounds of various degrees of difficulty. These rounds will test your accuracy and speed and overall archery skill all while having fun. We are also planning a youth shoot for ages under 12. The youth shoot is a fun shoot consisting of three rounds. The youth shoot is not for a championship title.There will be no loaner gear available