Are you new to the SCA?

Hello, and welcome to the Shire of Graywood. 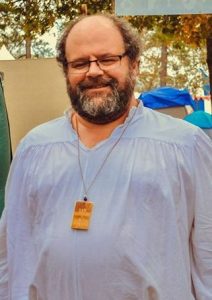 My name is Lord Walter LongStride, the hospitaler, and I’m pleased to welcome you to our website. If you have any questions, you’re welcome to send me an email at hospitaler@graywood.ansteorra.org or through our Facebook page Shire of Graywood. Please feel free to look around.

Are you new to the SCA?
The Society for Creative Anachronism, or SCA, is an international organization dedicated to researching and re-creating the arts, skills, and traditions of pre-17th-century cultures.
Members of the SCA study and take part in a variety of activities, which include combat, archery, equestrian activities, costuming, cooking, metalwork, woodworking, music, dance, calligraphy, fiber arts, and much more. If it was done in the Middle Ages or Renaissance, odds are you’ll find someone in the SCA interested in recreating it.

How did the SCA begin?
The SCA started in 1966, when a few friends who were history buffs and science fiction/fantasy fans hosted a big outdoor party in Berkeley, California. The invitation stated that a Tournament would be held on the first of May, summoning “all knights to defend in single combat the title of ‘fairest’ for their ladies.”
Please take a look around the website to see what we have to offer.
Everyone enjoyed the first tournament so much that they agreed a second should be run, but in a larger setting. In order to reserve one of the public parks for the gathering, the organizers needed to list a name for their group on the application. Since recreating the Middle Ages in 20th-century Berkeley was an anachronism (something “out of time”), and because the goal was creativity, they came up with “The Society for Creative Anachronism”. It was a spur-of-the-moment invention; they had no idea that the name would stay with their group more than 50 years into the future.
The SCA is now an international organization dedicated to researching and re-creating the arts and skills of pre-17th-century Europe. Our “Known World” consists of 20 kingdoms, with over 30,000 members residing in countries around the world. Participants, dressed in clothing of the Middle Ages and Renaissance, attend events which may feature tournaments, arts exhibits, classes, workshops, dancing, feasts, and more. Our “royalty” hold courts at which they recognize and honor members for their contributions to the group.

Who are those people wearing crowns?
The SCA has an elaborate system of rank, awards, and honors to recognize participants’ accomplishments and service to the Society. Everyone is presumed to be minor nobility when they join the SCA, but any noble titles or honors used in the SCA must be earned in the SCA. These honors are bestowed by the King and Queen or Prince and Princess during their Royal Courts.
The people wearing crowns are the reigning Kings and Queens. The heirs to the kingdom, the Crown Prince and Crown Princess, wear coronets which are usually a little less elaborate. In principalities, the reigning Prince and Princess wear coronets, as do their heirs.
After departing the thrones, former royalty become Royal Peers: Viscounts and Viscountesses (those who ruled principalities), Counts and Countesses (those who have reigned once as King or Queen), and Dukes and Duchesses (those who have reigned twice or more as King or Queen). The Royal Peers are entitled to wear coronets.
Another group of people entitled to wear coronets are Barons and Baronesses. They may be in charge of a Barony, or may have simply received the title of Court Baron or Court Baroness as a reward from the royalty.

What can I do in the SCA?
The answer to that is what CAN’T you do? If it involves the medieval era up to the 1700s, and is legal, there are so many ways to get involved in the SCA. To learn about the clothing of the period, you research it, then sew and wear it yourself. To learn about combat, you put on armor (which you may have built yourself) and learn how to defeat your opponent. To learn brewing, you make (and sample!) your own wines, meads and beers.
You will frequently hear SCA participants describe the SCA as recreating the Middle Ages “as they should have been.” In some ways this is true – we choose indoor plumbing, heated halls, sewing machines, and skip the black plague. In the dead of winter we have more to eat than King’s venison, salt pork, and dried tubers. A better description is that we selectively recreate the culture, choosing elements of the culture that interest and attract us.
Armored combat in the SCA resembles medieval foot tournaments. Combatants can face each other in single combat in tournaments, or can take part in large melee battles that can have dozens or even hundreds of combatants on each side. SCA combatants wear real armor and use rattan swords. Novice fighters are trained by the more experienced fighters. They are taught how to use their weapons, how to defend themselves, and how to judge blows received in combat. Every fighter on the field is on his/her honor to accept a blow sufficient to “wound” or “kill”.
Another type of SCA combat is fencing, also known as rapier combat. Participants use real fencing blades and for protection they wear regulation fencing masks, padded torso protection, and shirts and pants made from heavy fabric to protect their limbs. SCA fencing has its own set of marshals who supervise the authorization process. New fencers must demonstrate their knowledge of the rules and ability to participate safely before they can compete in tournaments.
In all SCA combat, safety is the most important consideration. There are armor requirements and rules which all participants must follow. Before combat begins, the marshals inspect the combatants’ equipment to make sure they are safe. During battles, the marshals watch for unsafe situations and keep spectators safe.

How do I choose a name?
Every person in the SCA picks a name to go by in the Society. Some of our folks have well-known names like Nicholas or Walter, names that are still used today. Your name be something simple and familiar or something elaborate and exotic-sounding, as long as you don’t use the name of an actual person from history or legend.
The SCA has its own College of Arms to help you select and register an SCA name and heraldic device. The College of Arms has many resources to assist members in their research, to ensure that their names and devices are appropriate to the world we try to recreate, and that each registered name and device will be unique.
Don’t worry about figuring out a name before you join the group. Many people go by their “first name of <somewhere>” for a while until they figure out what name they’d like to adopt.

What are events?
The major activity in the SCA is our events – the opportunity for us to put on our medieval clothing, cook and serve the recipes we’ve been researching, dance the dances we’ve been practicing, socialize, and generally have a good time. You can find a variety of SCA events taking place almost every weekend of the year, including: Tournaments, coronations, masked balls, collegiums, inter-kingdom wars, and more. Activities at events can include fighting, fencing, archery, art exhibits/competitions, indoor games, feasts and royal or baronial court.

How can I join?
We welcome you to come to our local meetings and events. You are not required to buy a membership before you start attending, although you may wish to join if you decide to be with us regularly. Members do pay lower entry fees to events, and some kingdoms require membership to participate in certain activities.
The SCA is a family friendly setting who welcomes all walks of life, and ask that you have fun.

Participants violating these rules are subject to appropriate sanctions. If an individual feels subjected to harassment, bullying or retaliation, they should contact a seneschal, President of the SCA, or the Kingdom’s Board Ombudsman. If a participant of the SCA becomes aware that someone is being harassed or bullied, they have a responsibility pursuant to the SCA Code of Conduct to come forward and report this behavior to a seneschal, President of the SCA or Kingdom’s Board Ombudsman.