The Baron and Baroness

The Baron and Baroness are the local ceremonial figureheads responsible for encouraging participation and upholding the traditions of the Barony of Bjornsborg and Society for Creative Anachronism. Pray heed their Excellencies’ words:

“Welcome to Bjornsborg, Land of the Argent Bear!

The members of Bjornsborg are a varied and diverse group of people, who invite you to join us in the Current Middle Ages. With so much to offer in our home, we are confident you will find an area that interests you.

As Baron and Baroness of these bountiful lands, we would be honored by your presence. We welcome each and every member of the Barony by extending a heartfelt invitation to you to join us at weekly fighting practices, an arts and sciences class, or an event in the very near future.

Please do not hesitate to come and meet us and our populace, or email at the email addresses below if you have any questions.

The following persons have served as Baron / Baroness of Bjornsborg:

Godwyn Alfricson and Radegund of Tours – October 2004 to October 2009 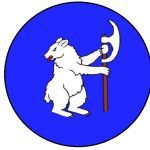 View the Baronial Awards and Orders

The Baron and Baroness can bestow awards upon members of their populace; this is a public recognition to acknowledge the skills and contributions of an individual to the Barony. View our awards by clicking this box.